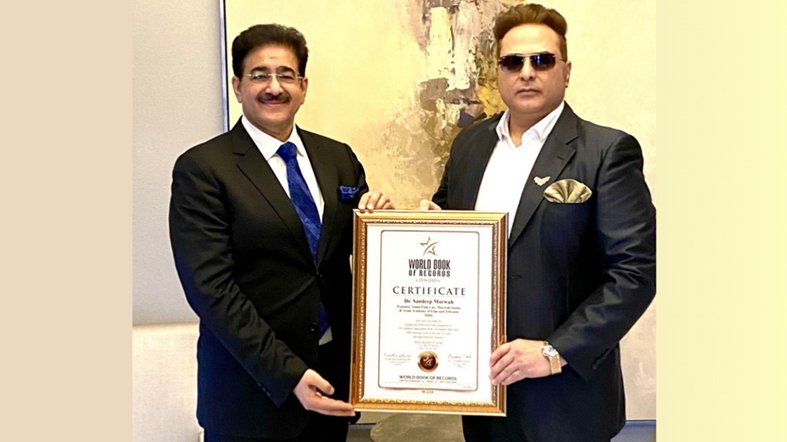 Dubai (UAE): The renowned film television and media personality Dr. Sandeep Marwah, President of Marwah Studios was honoured by The World Book of Records London for his sincere contribution to media and entertainment Industry during his recent visit to Dubai, UAE.

The contribution of Dr. Sandeep Marwah is immense in many different fields of creativity. This time he has been again exclusive in his approach. Dr. Sandeep Marwah has churned out 4500 television programs, has been associated with 125 feature films and 5000 training films from his popular Marwah Studios in last 30 years. We are happy to place him in the World Book of Records London,” said Dr. Jitendra Maltani President World Book of Records Dubai while handing over the certificate of honour to Dr. Marwah in an exclusive function at hotel Hilton Al Habtoor City, Dubai.

I am extremely happy and thankful to the entire family of World Book of Records London for accepting my application and giving me another good status of World Record Holder. The figures sound easy to pronounce but I have given my 30 years to Studios right from the conceiving the project in a most unconditional environments that time to now World Record Holder. During this time, we have learned a lot what life is all about and how it is connected directly to film making,” expressed Dr. Sandeep Marwah.

During the Pandemic, when Other Coaching Centres Struggled to Stay Afloat, JK Shah Thrives