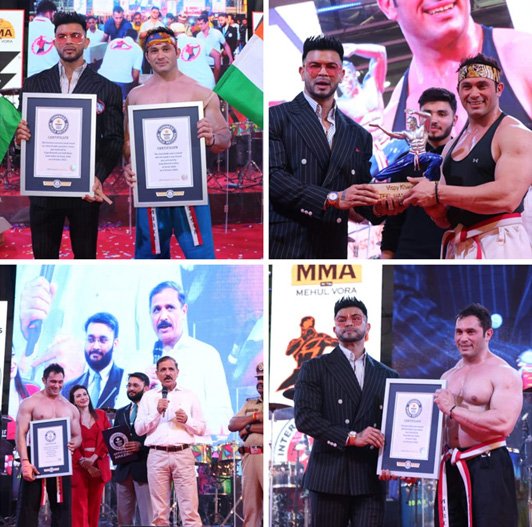 On October 4 this year, a new Guinness World Record was created when youth icon Sahil Khan and India’s well-known martial arts man Vispy Kharadi performed a dangerous stunt together. It so happened that Vispy put himself in between two huge concrete blocks, which were embedded with nails.  Noted film actor and fitness enthusiast, Sahil Khan, who wielded a hammer, brought it down on the upper block, eventually breaking it. This was how both of them earned a Guinness World record that day. Though Sahil was one of the celebrity guests at the event, Vispy went on to create not one, not two but three world records at the same event.

While receiving his award at the end of the event, Vispy expressed his gratitude towards Hiren Desi, owner of the Divine Nutrition, Faruk Patel, CMD of the KP Group and, of course, health ambassador Sahil Khan. In fact, when Khan performed the dangerous stunt along with Vispy, the crowd went berserk and applauded them both.

Sahil Khan made his Bollywood debut in 2001 with the fun caper ‘Style’ and after showing off his acting chops, he went on to do good work in other fields such as fitness training. Today he is the brain behind brands such as Divine Nutrition and he is doing a yeoman’s service towards increasing fitness awareness among Indians.

On the other hand, Vispy already holds 7 Guinness records but at the Sarsana dome in Surat, he broke an 11-year-old record while crushing the maximum number of drink cans, 84, with his hands within 60 seconds.

Best known as an exponent of martial arts in India, Vispy earned more global fame last week when he was felicitated for his amazing feat by Sahil Khan, himself an actor, a fitness entrepreneur & a social media influencer with more than 2.8 million subscribers on YouTube.