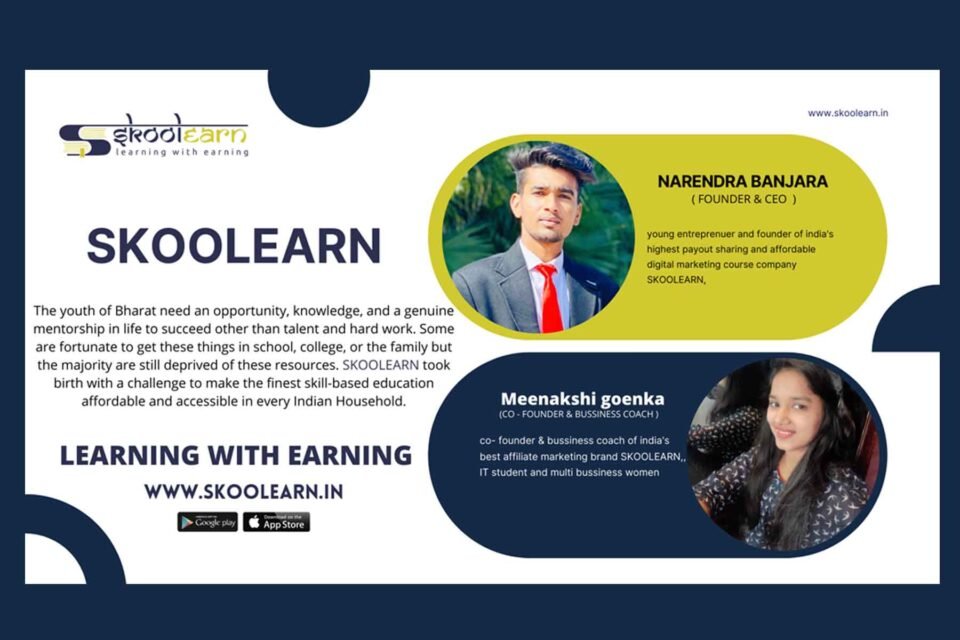 It is run by TWO astute minds, who have transformed more than 5 thousand lives in just 10 months, distributing commissions in crores.

The world we are living in right now is a world we did not imagine a year back. It is rocked by what is today known as a global health pandemic, which in ways more than one has changed the face of business industries across the world. People lost their jobs, had to shut their businesses and even the world economy collapsed. Amidst this, if we say a relatively new firm made millions, would you believe that? Well, this is a true story of a rising new business named SKOOLEARN, which is becoming a game-changer in the entrepreneurial world as it has been producing amazing talents through its digital courses and mentorship, helping people with skill development courses relating to career, business development and entrepreneurship and helping them learn the art and science of making money online with affiliate marketing.

Skoolearn is the brainchild of two astute minds, namely Narendra banjara, Founder and CEO; Meenakshi Goenka, Co-founder and COO. Narendra Banjara had a year of experience in affiliate marketing with an international brand; however, she saw a huge gap in the industry and found the system too complicated for people to understand. Hence, to simplify the same, she, along with two other talented beings, came up with Skoolearn. Speaking about Meenakshi, she always wanted to become a part of the entrepreneurial world and also loved public speaking and helping others, Along the journey, she gained immense knowledge and skills in sales, marketing and entrepreneurship by getting into the direct selling industry. Soon, she joined the training industry and began coaching others in the niche, which resulted in the emergence of, SKOOLEARN along with Narendra, co-founding the business to promote the skills of marketing and entrepreneurship.

The combined passion, perseverance and grit of all the two founders have taken Skoolearn to astounding levels of success just within a year our back-end team consists of 20-25 people and the company is planning to expand it by 50 people in the next six months.

All two saw that people in India couldn’t tap the potential of affiliate marketing and online entrepreneurship and are hardly aware of it; they knew they needed a new platform, simplifying everything for them. Skoolearn teaches them all the complex strategies in simpler ways and helps them with digital skills and online earning, which has allowed it to become a revolutionary learning ecosystem.

It began on 15th May 2021 amidst the pandemic and in just 11 months, Skoolearn becomes a million Dollar Company. Since Skoolearn also provides people with an opportunity to help become affiliates and earn a commission, it has already distributed a commission of 1 crores through affiliate marketing, a feat no other company has been able to achieve in less than a year

Skoolearn focuses on providing top quality knowledge and skills digitally combined with their personal mentorship, which has helped thousands of students to get nearer their financial goals during the harsh times of pandemic all thanks to the visions of the founder and the team’s relentless hard work.