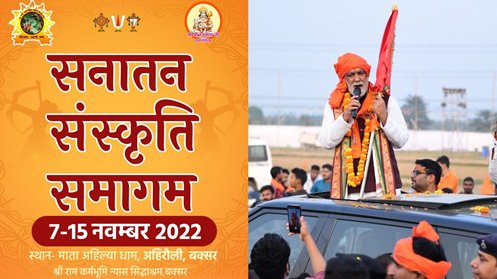 On Sunday, Lord Shri Ram’s Karmabhoomi Siddhashram Buxar echoed with Shri Ram’s name. The 9-day Sanatan Sanskriti Samagam has begun with this Shobha Yatra. Buxar MP, Union Minister, and Convenor of the Samagam, Ashwini Kumar Choubey and a large number of devotees accompanied the Shobha Yatra as it left Mata Ahilya Dham, Ahirauli. The Shobha Yatra included over 500 small and large vehicles. Jai Shri Ram slogans could be heard everywhere. Flowers were showered on devotees to boost their spirits. The enthusiasm and joy of Buxar residents could be seen everywhere. While touring the entire city in the Shobha Yatra it reached back to Mata Ahilya Dham, Ahirauli. The 15-kilometer yatra took four hours to complete. Tableaux depicted Lord Rama’s family, Lord Vamana, Maharishi Vishwamitra, and other sages on five chariots. The Shri Ram Karmabhoomi Yatra chariot, which was the centre of attention, was also moving. According to Union Minister Shri Choubey, the Samagam will play an important role in bringing the cultural and spiritual importance of Buxar to light. It is a religious city, a city of incarnation. The people of Buxar have pledged to increase Buxar’s divinity. Buxar will grow into a major religious centre for devotees from all over the world.

In the presence of Pujya Jeeyar Swamiji Maharaj, Yagya will begin today

After scripting success in Europe, Taj Indian Beer and Wines (alcohol-free) to be launched in Indian markets

The Grand Bhakti TV Koti Deeposthavam is on