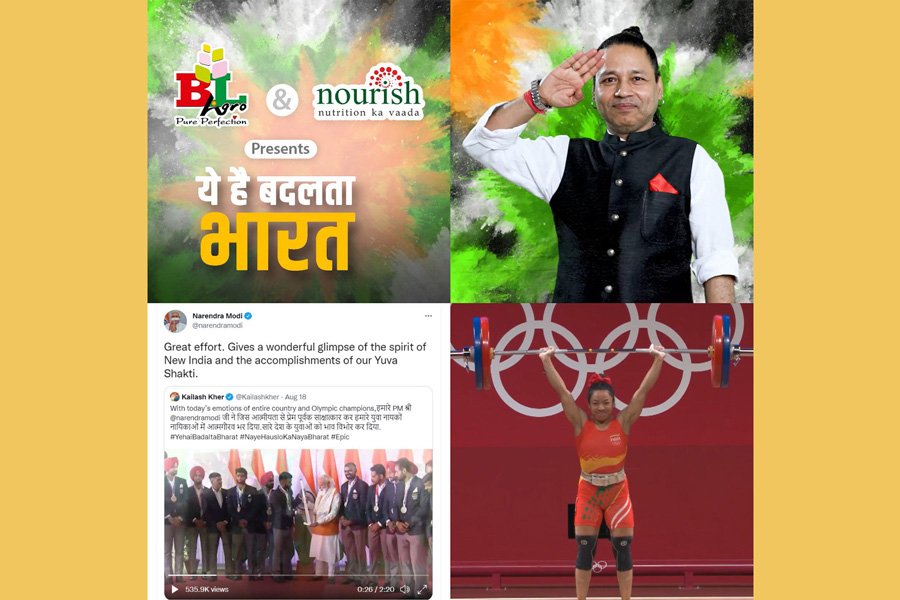 Noida, Uttar Pradesh, August 21, 2021: The song “Yeh Hai Badalta Bharat, Naye Hauslon Ka Naya Bharat” was retweeted by Honourable Prime Minister on Thursday appreciating the efforts of our champions. He also praised the way the song is produced, giving a glimpse of all our starts who represented India and won medals at Olympics 2020.

BL Agro, India’s one of the fastest growing edible oils and food products and Padma Shri Kailash Kher pays a musical tribute to the Olympic Champions who have won and made India proud. “Yeh Hai Badalta Bharat, Naye Hauslon Ka Naya Bharat” is an initiative to endorse the principle of hard work, fitness and nutrition and the attitude of never give up, which reflects in the champions of India and her countrymen.

The song is available on all music streaming platforms such as Damroo, Spotify, Gaana, Jio Saavn, Wynk Music, Resso, Apple Music, Hungama Music and is aired on electronic channels.

Mr. Narender Modi on Thursday morning retweeted this song from his Twitter handle appreciating the efforts of our champions. He also praised the way the song is produced, giving a glimpse of all our starts who represented India and won medals at Olympics 2020.

Great effort. Gives a wonderful glimpse of the spirit of New India and the accomplishments of our Yuva Shakti. https://t.co/nzHpbEXp2Z

Padma Shree Kailash Kher quotes“That’s how we are achieving new accolades and laurels. It’s a true celebration of an awaken spirit of new India. Salute to all hard-working countrymen, who are setting an example for our generation in the field of art, sports, defence, media, governance, corporates. I thank BL Agro and its Chairman, Shri Ghanshyam Khandelwal for extending their complete support for this cause”.

Ghanshyam Khandelwal, Chairman, BL Agro says “As a proud Indian, BL Argo salutes the achievements of our Olympic champions. In order to show our gratitude to the players and to further motivate the Indian sports community, BL Agro has taken this initiative along with Kailash Kher ji. It is an achievement for us to be appreciated and recognised by the honourable Prime Minister”.

Being the flag-bearer of government of India’s Vocal for Local campaign, BL Agro has stood out among the top food FMCG companies in recent years. Based in Bareilly, Uttar Pradesh, BL Agro Industries Ltd has been committed to providing quality food products over the years. The company today has one of the largest distribution networks amongst all branded edible oil and food product players in India with over 55,000 retailers.

BL Agro’s growth story is an inspiring story of success. Having started as a mustard trading house in 1950s, BL Agro has come a long way today. During the course of its grueling journey, the company transformed from a commodity trading organization to a full-fledged FMCG company. The marketers of a single mustard oil brand subsequently started rolling out multiple varieties of oil, including refined oils and then a range of food products under the brand name ‘Nourish’ – thus catering to a much wider consumer base. Brand Nourish comes with a promise for nutrition. The brand offers entire range of food products typically used in an Indian kitchen including Atta, Rice, Pulses, Ghee & Oils, Dry Fruits, Papad, Achars, Murabba, Spices, etc. Each Nourish product is packed with superior quality ingredients and is produced with finest processes that ensure maximum retention of nutrients.

Freemasons of Telangana distribute tools to 30 street vendors, petty, small traders and women doing business from home to re-start their livelihood which they lost due to Pandemic