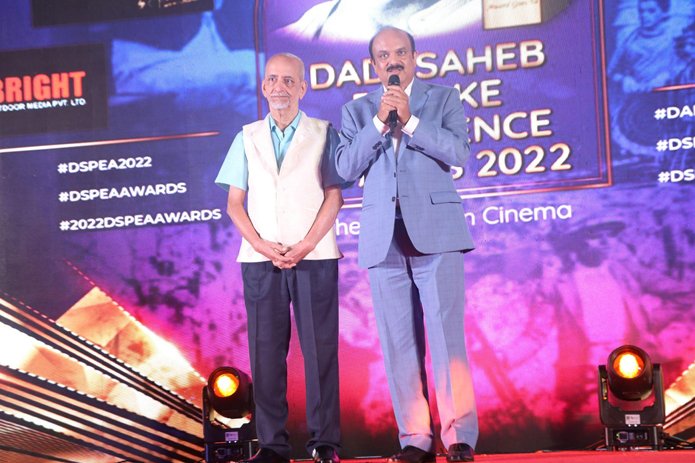 Educationalist and philanthropist Pankaj Bhujbal attended the 17th edition of the Dadasaheb Phalke Excellence Awards in Mumbai as the guest of honor. The Dadasaheb Phalke Excellence Awards 2022 were held here on Saturday. The award honours individuals from the entertainment industry for their outstanding contributions to the growth and development of cinema and/or television.

While talking to the media, the MET trustee said that Dada Saheb Phalke was the Nashik son of the soil. He was the father of motion pictures in India, and his contribution to the Indian entertainment industry is enormous. I am happy to attend this Dadasaheb Phalke Excellence Awards event.

In his speech during the event, Mr. Pankaj Bhujbal said, “MET IMM is considered as one of the top ranking Mass Media & Communication Institutions in Mumbai. He wished all the best to Sumit Kumar Singh, an alumnus of MET (Bhujbal Knowledge City) for organising such a successful event where Hollywood and Bollywood cinema people were sharing the stage. On the special request from the grandson of Dadasheb Phalke, Mr. Kiran Phalke, Mr. Bhujbal accepted a small request to have a new statue of Dadasheb Phalke in front of the late Dadasheb Phalke’s ancestor’s home in Nashik. Mr. Pankaj Bhujaba asked for a detailed proposal from the Dadasaheb Phalke Excellence Awards Team, and he assured Kiran Phalke that the Bhujbal family has always supported Dadasheb Phalke’s legacy.

Apart from that, if we look at the modern city of Nashik, it was built by the visionary leadership of Chhagan Bhujbal, former Deputy Chief Minister of Maharashtra and Hon. Founder and Chairman, Mumbai Educational Trust.

Pankaj Bhujbal’s involvement in technical and academic programmes of excellence in education has made him a visionary figure. He is connected with several educational, social, and cultural organisations striving for excellence in all walks of life. Mr. Pankaj Bhujbal is presently a Member of the Legislative Assembly of Maharashtra.

CoinFantasy is set to define a New Fantasy Trading Category