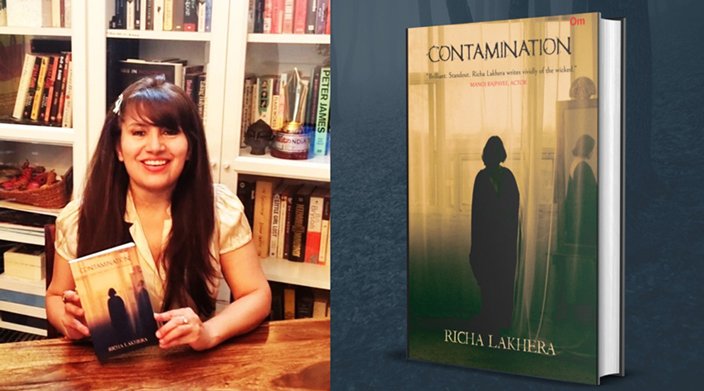 Mumbai, (Maharashtra) [India]: Bestselling author, Richa Lakhera recently released her latest Supernatural– Combat, Fantasy – Adventure fiction book titled ‘CONTAMINATION’. Published by Om Books International, one of the largest English-language trade publishers in the Indian subcontinent, the book is a spine-chilling journey into the realm of supernatural and horror. Richa is an award-winning TV journalist, and has worked as Deputy Editor & Senior Correspondent at NDTV 24×7 and NDTV India for over a decade. Richa Lakhera is no stranger to fiction writing, this is her sixth book and has delivered bestselling novels including HUNGRY GODS, ITEM GIRL, GARBAGE BEAT.

Richa Lakhera’s work as an author has won her several accolades from celebrated actors and some of the biggest names in the Bollywood industry.  Manoj Bajpayee, One of India’s most talented actors with landmark films like Satya, Gangs of Wasseypur, Aligarh to recently the hugely acclaimed series Family Man, was one of the first persons to read this book said “The novel Contamination is brilliant. Standout. Richa Lakhera writes vividly of the wicked.” Farrukh Dhondy, well known British playwright & screen writer of films like Mangal Pandey – The Rising, Kisna: The Warrior Poet, Red Mercury said, “Supernature is India’s Godmother. Contamination gives her an original, compelling, eerie and even action-filled avatar.”

Richa’s book CONTAMINATION, is a realm of supernatural powers in a contemporary setting with mythological creatures, dark forces and their phantasmic-Astras (weapons). It pits modern evil against ancient powers. Much like mythologist Joseph Campbell’s monomyth, the chief protagonist Amba’s journey is the classic hero’s journey—from ordeals & struggle to making allies & enemies; to seeking supernatural aid and finally crossing the threshold towards resurrection & resolution. A reluctant hero at first, Amba’s nights are troubled by disturbing dreams that take her into parallel universes. She craves to be ordinary but her powers, which she has always kept hidden, are being slowly unmasked and she is no longer able to separate her normal life from the high stakes of being her true self.

Contamination also explores brother-sister strained relationships, and the power play between the genders, relation with her mentors, envy, pride, lust, greed, cowardice to courage, faith and kindness—and it is about the transformative power of forgiveness. Any good vs evil is only as good as the villain, and the psychopathic jailer Colonel Rosie Madbull is as evil as they come. Fleeing from Madbull’s fearsome jail, Amba is destined to fulfil many a prophecy.  In an epic battle she is forced to unleash the terrifying Furies and their phantasmic-Astras. Hunting with them will take Amba to the very edge of being human.

Richa’s diverse experience in storytelling and communications has taken shape across various platforms.  Her writing is inspired by her work as a journalist and her novels encompass myriad cultural sub-sets in multiple genres including crime thrillers, revenge dramas, supernatural adventure to young adult coming of age stories. Four of her English novels have been adapted in Hindi and her titles have been picked up for film adaptation and OTT too.

Richa’s previous bestsellers have been published by leading publishing houses including Rupa Publishers and Harper Collins. Her book, GARBAGE BEAT is a satire on Indian TV industry and was released by Bollywood heart throb Kareena Kapoor. Her last book, HUNGRY GODS took a hard look at greed for wealth and power. This Best Seller took readers to the underbelly of the film industry, corporates, and power centres. Richa’s work has also won words of praise from Film Director Hansal Mehta and the legendary actor, Late Irrfan Khan too.

You can get your copy of CONTAMINATION here: https://tinyurl.com/BuyContaminationByRichaLakhera

You Can Follow the author on her social media handles: